ArthurVKuhrmeier hasn't added any friends yet.

Thanks a lot, Rampa. A challenge it is.

And y'all can watch the progress here:

QUOTE (ArthurVKuhrmeier @ Apr 4 2014, 7:17 PM) <{POST_SNAPBACK}>
The tricky thing was this: The root bone has no relative parent and requires the correction of it's position and rotation due to the different 3D spaces in blender and Moviestorm. But the calculation differs for skeleton and animations.
Almost right!

Only the skeleton needs correction of the root bones. The animation does not!

Finally I got it right -- unless there are more surprises waiting for me.

Soon I'll post one of the shortest short films with the longest time in the making,
Arthur

THE DAYS OF DESPAIR

are hopefully over now. It took me ages and billions of nerves

to complete the export for the skeleton and animations. I haven't put it to the test yet. But here some news:

Exporting the skeleton was almost a piece of cake.

But I was awfully stuck on the animations. After a couple of days I realized that the import of animations was not quite right.

The tricky thing was this: The root bone has no relative parent and requires the correction of it's position and rotation due to the different 3D spaces in blender and Moviestorm. But the calculation differs for skeleton and animations. To find out the correct ones was a pain in the ass.

After updating the animation import I was able to figure out the correct export. I hope.

I dropped the idea of markers. After evaluating the pros and cons and I decided to go for the NLA strips: 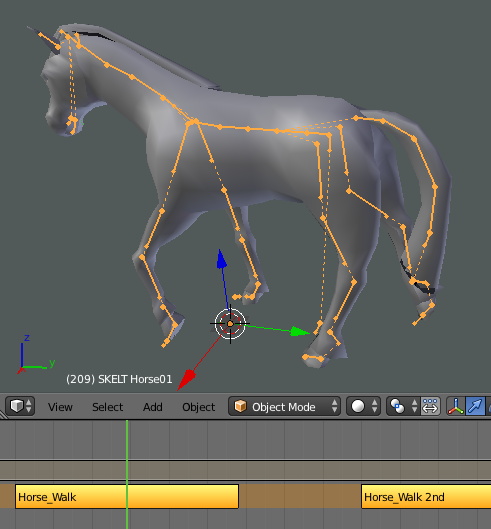 Now I have to update the export to the NLA strip actions.
Love and success,

QUOTE (rampa @ Mar 23 2014, 11:51 PM) <{POST_SNAPBACK}>
Wow! you were able to import the CAL3D animation? Superb.
The power of Blender should help modders dramatically!
Many thanks, rampa. And I totally agree! blender is a very powerful tool and has everything (and much more) you need to create animations, costumes, hair, animated props etc.

I have decided not to use blender's action strips for export. I never warmed up with them; somehow they don't feel blender-like. Instead the import plugin will set markers on the timeline where an animation starts and ends:

These two animations were imported on an existing skeleton. If an animation is already imported it will not be overwritten -- the user may have made changes -- but re-imported with an ordinal number added to the marker's name. Markers can easily be set, renamed, moved, and deleted. In the "Dope Sheet" you can select everything between two selected markers! The export script will look for markers with the same name to save the animation.

The time is near for the skeleton export,
Arthur 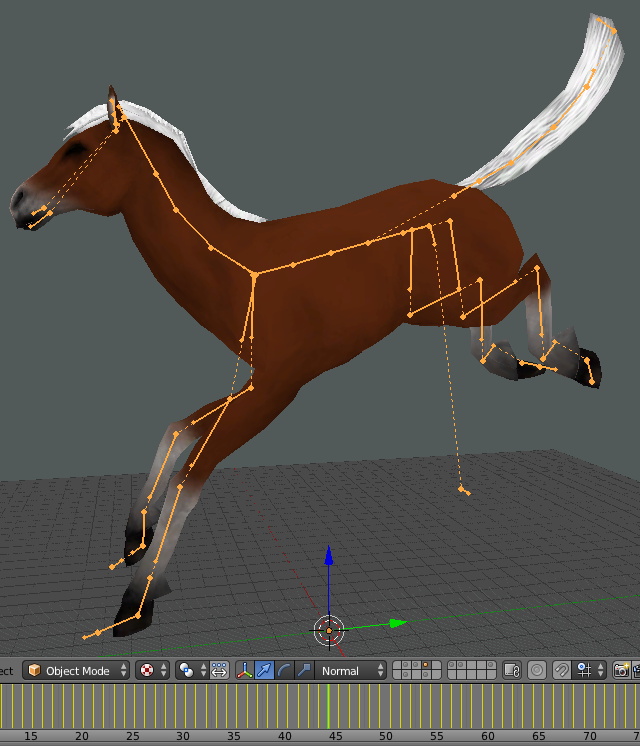 The next milestone is conquered.

Importing animation works, and they look terrific! There were two problems. The first one was caused by adjusting the length of the bones to make the skeleton more usable. I simply didn't reapply the rolls of the bones correctly. The second one was to find out which values go where: swap X and Y or Y and Z, and which values to negate. Trial and error -- sometimes faster than thinking.

Next task is to move the animations to blender's dreadful actions.
Arthur